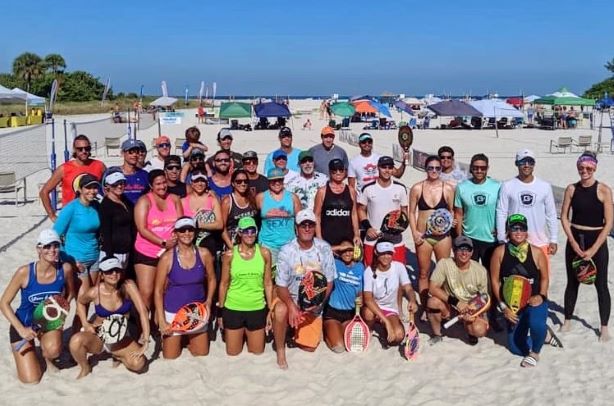 More than 350 athletes competed over the three day weekend from September 27-29, 2019. An addition to the Beach Games weekend was an opportunity for all hotel guests, spectators, and Beach Games participants to enter a corn hole tournament. Corn hole which was once considered a simple backyard gathering entertainment has grown into a professional sport and can even be seen televised on ESPN.
The 2019 Sand Key Beach Tennis World Cup, an IFBT competition, was the cornerstone event offering $2500 in prize money which was distributed to Gold and Silver medal winners in 5 divisions. Although attendance was reduced by half from last years record of over 100 Beach Tennis professionals because of two conflicting tournaments the same weekend, the competition was still of very high caliber! All the athletes battled their hearts out for their share of the prize money and coveted IFBT ranking points.
The results and match scores are listed below:
In the Men's Open Singles final Carlos Rivera (PRI) defeated Matteo Godio (ITA) 9-3. Ignacio de Elia (USA) and Jose Manuel Millan (VEN) tied for the Bronze Medal.

All of the athletes that competed in the various events were treated to a complimentary buffet style banquet and a cash bar in the Sheraton's vast ballroom space on Saturday evening sponsored by the Clearwater / St. Petersburg Sports & Events and prepared by the Sheraton's own culinary staff. The banquet received rave reviews by all the athletes and the only complaint heard was that the party had to end!

We have 53 guests and no members online