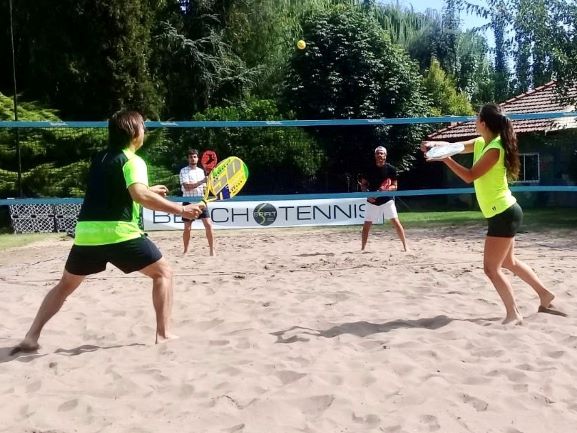 For the first time, beach tennis arrives in Chacras de Coria, a small town on the edge of the Argentinean city of Mendoza, near the Andes Mountains. It's known for its wineries and restaurants, and is a gateway to nearby Ruta del Vino vineyards. Even though January is the wettest month, the players were lucky enough to spend an awesome day enjoying the game and the sun.

Through IFBT Argentina, and with the support of IFBT International, beach tennis keeps on being promoted and developed throughout the country.
During the first days of January a clinic and initiation tournament, run by Javier Cueto, was carried out at the Chacras Club, the pioneer club in Mendoza with the first beach tennis court, and spreading this sporting activity.
Dozens of adults of all ages and a few children between 13 and 17 years old have participated in the clinic. At the end of the event, many have already made the decision to start practicing the sport on a regular basis.
Satisfied with how much fun people have had playing beach tennis, the organisers of the event, led by Javier Cueto, have taken lead on holding another similar event in the province of Mendoza in the spring months.

And we, as usual, will keep you updated here on www.ifbt.eu and on instagram @ ifbt.global

We have 285 guests and no members online