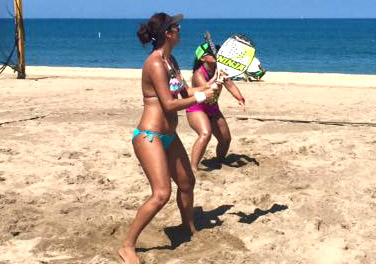 In the municipality of Carolina in Puerto Rico, the IFBT Carolina Beach Tennis Open 2 took place. Open Men's, Women's and Mixed Doubles, Over 40's Men's and Women's Doubles and Advanced Men's, Women's, and Mixed Doubles categories were played. In all categories there were new champions in relation to past events.In Pro Division, the Men's Doubles Open, Luis M Reyes/Freddy Velez outperformed Jimmy and Louis Lafontaine, a father and son team who showed the champions great determination and effort.

In the Women's Doubles Open, Sharon Puy from Aruba joined Dory Bodón and faced Adriana Daza and Rebecca C Ramirez in the finals. The team of Sharon and Dory took the victory and were crowned the new champions. In Mixed Doubles, the gold medals went to Luis M Reyes y Gabriela Dávila teaming up for the first time, and in the Men's Over 40 category, new monarchs in Beach Tennis Puerto Rico, Hector SanJenis and Luis Santiago win their first championship in this division. The Women's Over 40 also had new champions. The team of Teresa Martinez and Saribell Martinez won the final match against Inés Portuondo y Zoime Alvarez, who participated for the first time in a Beach Tennis tournament.

In the Mixed, Alejandro Hernandez and Vanessa Ramirez, a veteran and novice player, won their first tournament together against the finalists Amneris Febles and Jose Collazo.

We have 56 guests and no members online