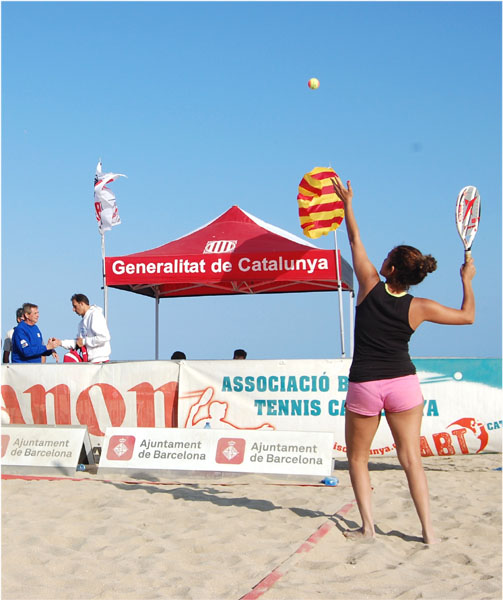 The day was spent Sunday, May 12 on the Bogatell beach in the city of Barcelona, was characterized by an atmosphere of brotherhood and sportsmanship.
The tournament had a total duration of 10 hours, from the first game to final delivery of prizes. The organization of the Federation of Catalunya organized the event with 8 Beach Tennis courts.

The sun and good weather accompanied the IV Barcelona Canon Trophy throughout the day. All players enjoyed a number of matches and system which offers many options to qualify and advance. Keep in mind that this tournament was for Grade 3 world ranking points!

In Pro Men's Doubles, the victory went to Martín Magriñá and Cristóbal Ramírez, who prevailed in the final, (7-5 tiebreak) to Gerard Rodriguez and Alex Albors. The winners took as a prize a new compact camera that allows recording photos in high-definition, compliments of the tournaments sponsor Canon. The same prize was awarded to the first place winners of the Women's Doubles, Gemma and Laura Herrero Egea, who defeated Tania Gonzalez and Natalia Baez in the finals.

In Men's Doubles Pro-Ad category, young Albert Casanovas and Albert Perez Querol beat Oscar Rivera and Raul Montenegro (9-2) kicking off the play offs championships.
In Women's Doubles, the victory went to Tonia Rios and Cristina Pastor, that taking first place in the round robin of this category. Finally, the match that closed the day was the end of Pro Mixed Doubles, where the the teams of Jordi Peinado/Gemma Egea imposed on Victor Martínez /Tania González winning at 9-7.

We continue the wold tour in Barcelona (Catalonia) for the International Beach Tennis Tournament on June 28-29-30. This is the 3rd European Beach Tennis Championship.

We have 255 guests and no members online