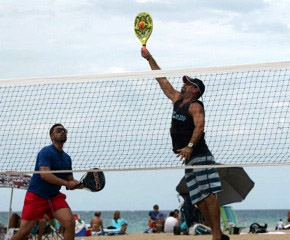 Fun, sun and a lot of friendly competition took place in the beautiful beach of Ocean Park. The best players from Puerto Rico met up in the second tournament of the year.

In singles competition, Gabriel Montilla maintained his undefeated run in 2013 by defeating upcoming junior and tournament surprise Javier Mendez. Javier had never reached more than a quarterfinals in a singles tournament.

He decided to train harder and his work paid off. He had two tough matches in quarters and semis defeating Gary Bodon and Gilberto Rivera before falling short to Montilla.

In Mixed Pro doubles, Beatriz Rivera and Gabriel Montilla defeated Pedro Ochoa and Natalia Mazorra in a well battled contest with both teams giving their all out best.

The Puerto Rico teams now set their sights in the G1 Deerfield Beach championships!
See you all there!!!

We have 16 guests and no members online