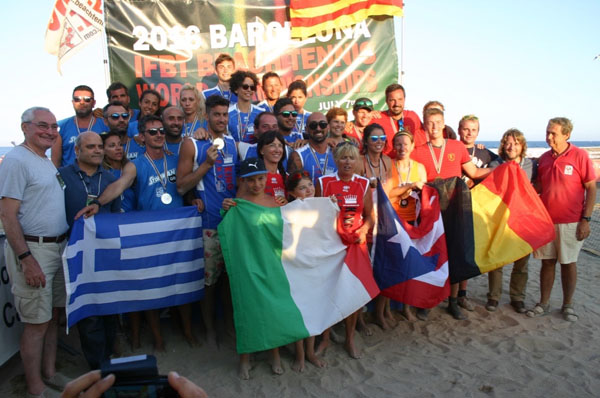 For the second year running the Italian team won the World Beach Tennis championship. They defeated Greece in both Women's and Men's. This victory consolidates Italy as an international Beach Tennis world power. The Italian power of both new and veteran players manages to surprise every year and they continue to stand on the main positions on the winners' podium. The Italian national anthem has been heard on the four days of the tournament; Italy was the country which got more medals of all the 21 participating nationalities.

The performance of the 3 gold doubles medalists Lucia Caldironi and Patrizia Pirazzini should be highlighted (Women's doubles +30, Women's doubles +40 and women's doubles Pro) Three women players and five men players have placed Greece on the second position on the podium in the Nations' competition. The Greek anthem was also herad on several occasions during this celebration of beach sport. For the second year running Catalonia has been defeated by the second place holders, Belarus last year and Greece this year. However, both the Catalan flag and the Catalan national anthem have been present on several podiums: Men's doubles +45, men's doubles +35, Mixed sub-14, Men's singles Pro and Men's doubles Pro.
We should also highlight the excellent performance of two national teams that have achieved the bronze medal in the Nation's competition: Puerto Rico and Belgium. The Portoricans played a great tournament and managed to be one of the most esteemed teams in the IFBT World Beach Tennis. They got gold medals on some of the most disputed and internationally recognized categories in the tournament: Men's doubles Pro and Mixed doubles Pro. The pair Freddy Vélez and Luis Miguel Reyes was one of the most followed during the competition. During the mixed games, Reyes played with Beatriz Rivera, who also got the silver medal in the Women's singles pro. Their teammate Vladimir Helmut also got very good results: another silver medal in the Men's singles Pro. The Belgium players Eva Maes and Sindy Put were the champions in the Women's doubles +35 and also got second place in Women's doubles Pro. Pert Laenen and Jeff Luyten, also from the Belgium team, got a silver medal in the Men's doubles +35
On a different note, we should mention the presence of Egypt's national team for the first time ever, at an international IFBT tournament and they passed the test, particularly with the performance of Rana Ganil, Hussein Elaroussy and others. All players have showed their fair play attitude and their willingness to enjoy these festive days on Barcelona beach. The players went back home after enjoying, one more time, a World Beach Tennis championship in the Catalan capital; a welcoming city which is steadily consolidating its status as World Beach Tennis headquarters. The Catalan Beach Tennis Association has, in terms of participation and organization, successfully closed this third edition of the Barcelona 2016 World IFBT Beach Tennis. Both Barcelona City Council and Generalitat de Catalunya have offered their support to the tournament thus increasing sport tourism in the city. Players from all over the world have met on Mar Bella beach for the third year running, placing Barcelona on the international map of this sport.

We have 69 guests and no members online