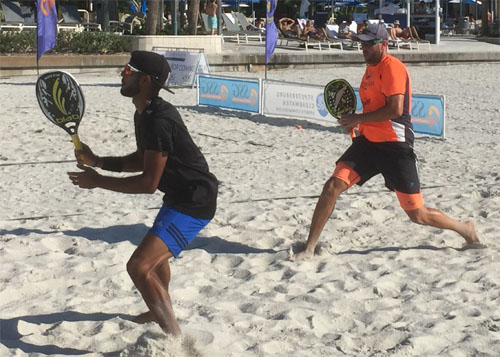 The 2016 International Beach Games was hosted by the Sheraton Sand Key Resort this past weekend which included Beach Tennis, Ultimate Frisbee, USATF Super Weight Throw, and an exhibition of the Caber Throw by the Highland Games folks. Over 200 International athletes competed over the three day weekend from September 23 - 25, 2016.

The 2016 Sand Key Beach Tennis Open, an IFBT World Cup competition was the cornerstone event offering $5000 which was distributed to Gold, Silver, and Bronze Medal winners in 5 divisions. 56 Beach Tennis professionals from all over the world competed over the three day weekend in the grueling Florida heat for their share of the prize money and coveted IFBT ranking points.

The results and match scores are listed below:

All of the athletes that competed in the various events were treated to a complimentary buffet style banquet and a cash bar in the Sheraton's vast ballroom space on Saturday evening sponsored by the Clearwater/St. Petersburg Sports Commission and prepared by the Sheraton's own culinary staff. The banquet received rave reviews by all the athletes and the only complaint heard was that the party had to end!

Keep charging and see you on the sand,

We have 84 guests and no members online