The 2nd annual IFBT World Cup in Cancun, Mexico was held at the beautiful, 5 star, all-inclusive Paridisus Hotel and Resort. The tournament's location was footsteps from the ocean and with the resort in the background made for a spectacular event.
In the Men's Pro Doubles, all of the competitors were trying to upset the #1 seeds of Joao Nunan and Adao Chagas. 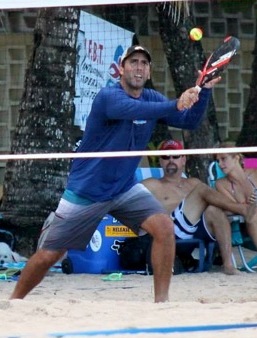 This past weekend witnessed the gathering of all the best beach tennis players Puerto Rico has to offer. Action began with the men's singles in which Gabriel Montilla became champion by beating Carlos Rivera by the score of 6-1.

The tournament continued with the Men's Open doubles in which groups commenced playing round robin. The best players came out of the round robin to meet in the round of 16. America's best junior, Javier Mendez, with new partner Luis Lafontaine got to the semifinals, loosing to eventual champions Gabriel Montilla and Pedro Ochoa.

Sant Antoni de Calonge, a small town in the Catalan coast, each year hosts a major beach tennis tournament with the name of the beach of Torre Valentina. In this part of the world, the number of players is growing continuously, and now has several courts for public use.
As usual the tournament is characterized by the significant number of participants, with this year the number has reached 100 players, players who participated in the various events organized by the Club Piper's under the direction of Oriol Vega.

We have 314 guests and no members online