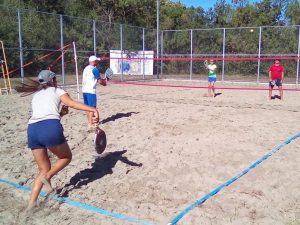 The National Tournament on the 25th of September was organized in Dobrich and directed by Teodor Velikov and Mitko Dimitrov. It was the first tournament and the third of Bulgaria under the partnership of the IFBT International Beach Tennis after the corona issues.
The tournament was held on a splendid sunny day with a good atmosphere! It was enjoyed by all players.
In Men’s Doubles Vladimir Kazakov and Dimitrii Pochuev from Russia beat the Bulgarians Slav Dimov and Plamen Kolev. In Mixed Doubles the pair Tsvetanka Dimitrova and Konstantin Stoyanov from Bulgaria beat the Bulgarian pair Iliyana Petrova and Drovil Savov.
In the Master Category Over 50 the Russian pair Vladimir Kazakov and Dmitri Pochuev beat the Bulgarian Konstantin Stoyanov and Mitko Dimitrov.