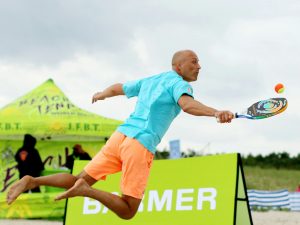 There was a lot happening at the BARMER Beach Tennis Cup in Dierhagen. In 2021, the Ostseebad Dierhagen again successfully hosted an IFBT tournament in Beach Tennis. While on Friday, August 13th the beach weather was excellent until the early evening, the night and Saturday brought strong wind which posed some challenges for the players and the organizers.
Matches were played in the categories of Women’s Doubles, Men’s Doubles and Men’s Doubles Over-40, ranking points from the IFBT International Beach Tennis Association were given. Participants from eight federal states of Germany started on the beach in Dierhagen. A large stage, six courts and numerous tents transformed the beach into a large sports and event arena. In addition to the thrilling 2-on-2 matches on the 16 x 8 meters courts, there were yoga classes and free massages for the players all day long. There was also a tasting station from the energy drink manufacturer SILBERPFEIL, who also provided the public with free drinks. In addition free ice cream was given out to the players and spectators. On Saturday, American football could also be viewed in the deep sand with the Rostock Griffins players.
On Friday the sun was shining and the sky was blue. In the Men’s Over-40 final, Frank Scherer and Jan Ramthun (both from Rostock) beat Ralf Große-Wilde (Berlin BTV) and Thomas Oberwalder (Kühlungsborn) 11:9 in the tie-break after 8:8. The two teams made it into the final with a flawless record of 5 wins.
Saturday began with the group phase in Men’s Doubles at 9 a.m. There were played on the courts for eight hours before the winners were determined, and the winners came from the island of Usedom. In the final Roman Maaßen/Lutz Genz won against last year’s winners Martin Dominik/Sebastian Pick (both from Stralsund), who struggled with the strong wind.
In the Women’s Doubles Jana Sommerfeld and her partner Nadja Arp (both from Rostock) won the final against Sibylle Fink/Brit Priester (Kühlungsborn), who managed the feat of reaching the final after finishing last in the group phase. Third place went to Kathleen Berndt/Mia Wesley (Usedom).