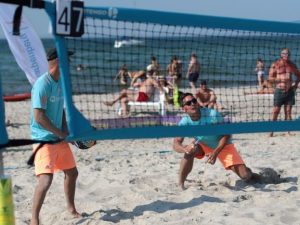 At the BARMER Beach Tennis Cup, which was held on August 14th and 15th, 2020 in the Baltic resort of Dierhagen, the gold medals in all disciplines remained in Mecklenburg-Western Pomerania. The IFBT tournament was played for world ranking points in the category “Int. Open 2” in Women’s Doubles, Men’s Doubles and Men’s Doubles Over-40. In addition, fifteen Mixed pairs started a leisure tournament on Saturday afternoon. Players joined from all over Northern Germany. The event started on Friday noon with a come-together, practice, Beach Tennis promotion, and a sundowner tournament in the evening.

In the Men’s Doubles category, the co-favourites from Stralsund, Sebastian Pick and Martin Domnick were able to prevail in an exciting final against Moritz Marker (Berlin) and Florian Stolley (Hamburg). The well-rehearsed doubles team from MV already had some trouble winning the match in the semi-finals against Christian Huth and Marcel Stork from Halle. Ultimately, the strong service game of the Stralsund beach boys was the decisive factor for the success of the tournament, for which Domnick/Pick collected a whopping 110 World Ranking points.

In the Women’s Doubles category, the favorites Tina Hübner and Luisa Voigt from Rostock won. The two experienced players dominated the women’s field and won all five of their matches safely with a balance of 39:5 games. The final match against Elke Niendorf and Nadja Arp was also a clear affair in favor of Hübner/Voigt; the final score 9:2.

In the Men’s Double Over-40, to the delight of tournament director Jens Starck, the players Frank Schröter and Dieter Blaudow from the organizing TC Barth e.V. prevailed.

Jana Sommerfeld and Frank Scherer from Rostock won in the leisure mixed at the end of the two-day event. They won the final against Luisa Voigt – who had to be treated in the semifinals because of a hornet sting in the foot – and Johannes Treu, also from Rostock.

Thomas Oberwalder, German delegate of the Beach Tennis International Association IFBT, was also enthusiastic. “Plenty of sunshine, many participants from all over Northeast Germany and a dreamlike backdrop with the Dierhagen seaside – what more could you want. We feel particularly at home in Dierhagen. The interaction between sponsors, the Dierhagen administration, and the organizing TC Blau-Weiß Barth was perfect. Players were happy as well. Many of the participants arrived on Thursday and were busy training on the five courts on the beach on Friday”, said Oberwalder. Numerous visitors tried their hand at Beach Tennis during the two days of the tournament. The rackets were always out of stock.

Due to the Covid-19 restrictions this year organizers couldn’t hold the classical party on the beach for players. That should be completely different next year, and organizers would like to welcome players from others countries next year in Dierhagen 2021.