Success at the European Championships Despite the Corona and the Rain

Success at the European Championships Despite the Corona and the Rain 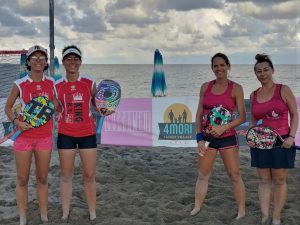 The European Championships have been hosted for six consecutive years at the 4 Mori Camping Village in Muravera on the island of Sardinia. Despite the problems related to Corona which prevented several teams from participating: Catalonia, Germany, Bulgaria and others. The players also suffered the rain during the early days.Many local players participated in the Championships.
In the competition for teams saw the success of Italy (Galeati, Gibini, Claudia and Ilaria Brunelli), who beat in the final Poland A (Pasieka, Nowicki, Przyblyska, Borzecka) 2-0. Third place for Luxembourg (Petrillo, Imbimbo, Valasik, Cerusico, Melis) and Team Orrù (Affuso, Carboni, Sara and Roberta Orrù).
In the Men’s Doubles Pro the Italian pair Galeati-Iavarone was successful beating the Polish Pasieka-Nowicki. In the Women’s Doubles the Ravenna sisters Brunelli-Brunelli beat the Sardinian sisters Orrù-Orrù. In Mixed Doubles 27 pairs participated, and the grand finale was between the Ravennian players Galeati-Brunelli who beat the Sardinian pair Malafronte-Seruis.
Great participation also by the very young Under, who fought with enthusiasm and were all rewarded with a beautiful medal made by the 4 Mori.
See you next year, in all probability still in the very hospitable and ideal location of the village located on the south-east coast of the island, less than an hour from Cagliari and not far from Villasimius and Arbatax.