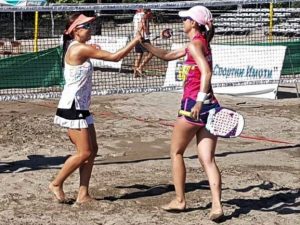 The Beach Tennis Club Burgas held the third Memorial Tournament of Petya Jesse Yaneva. In the Opening Ceremony assisted Petya’s mother Gergina Yaneva, and the Chair of the Council Committee on Sports, Jordan Georgiev. The Championships were celebrated on the Central Public Beach in Burgas during a beautiful sunny day. It was the first Tournament celebrated in Bulgaria under the IFBT. All players were particularly proud to participate for the first time in an International IFBT event.

The Master Category Over 50 the Bulgarian Konstantin Stoyanov and Ognyan Fotev beat the Russian Vladimir Kazakov and Dmitrii Pochuev.