Tournament in Boltenhagen with Winners from all over Germany and Switzerland

Tournament in Boltenhagen with Winners from all over Germany and Switzerland

From Friday 24th to Sunday 26th of July there was an IFBT event for World Ranking points in Boltenhagen/Germany. From recreational players to top-ranked starters, players from all performance classes and from all over Germany and Switzerland have been part of the tournament. 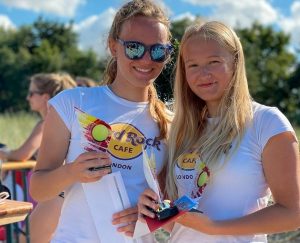 There have been matches for points in the deep sand on eight playing fields directly at the pier. The organizers around SC Boltenhagen were fortunate to have a large number of participants – despite strict corona requirements to hold the tournament. The weather also played along on Friday and Saturday. Sunday morning brought a lot of rain and a thunderstorm; but the sun shone again at the award ceremony in the early evening.

The Boltenhagen Beach Tennis Cup has been played for the 17th time, and is one of the largest Beach Tennis events in Germany. IFBT World Ranking points in the “International Open 2” category were awarded to the participants for the first time.

In the Men’s Double discipline, Martin Schaale (Berlin) and Marc Morgenroth (Switzerland) secured the tournament victory. They prevailed in the final against Martin Domnick and Sebastian Pick from Stralsund. In the Women’s Doubles, Daniela Gayck (Hamburg) and Christina Schaale (Berlin) won and were able to enjoy the trophies, prize money, and plenty of points. Second place went to Emma Ansorge and Cora Brosch, two young players from Mecklenburg-Western Pomerania. The victory in the hard-fought Men’s Singles went to Hauke ​​Segert (Rostock), who prevailed against Alexander Lyubchenko (Schwerin) in the final match. In the Women’s competition, Tina Hübner (Rostock), experienced in the World Cup and European Championship, took first place with a final victory against Christina Schaale. The Mixed final on Saturday evening Pauline Lustig / Hauke ​​Segert defeated Tina Hübner / Thomas Oberwalder.

Even in the Over 40 it was all about the job. Elke Niendorf / Christina Portwich from Rostock won the Senior Women’s Doubles. For Men, Frank Scherer / Sebastian Ahlert secured the Over 40 tournament victory. Jana Sommerfeld and Frank Scherer came out on top in mixed seniors.

The next IFBT tournament on Germany soil will take place on August 14th to 15th. August in Dierhagen. From recreational players to experienced tournament players – everyone is welcome to be there. More information is available at dierhagen.beachtennis.one